My goodness have we had a tough time keeping this one quiet! Finally we can spill the beans on who came to visit us last month here in Maun.

Three weeks ago, team Foot welcomed team TAYLOR SWIFT and her film crew for the newly released music video – Wildest Dreams – to Ride Botswana! The team, including one of LA’s A-List Producers – Joseph Khan, had just returned from 5 nights spent filming with a by-plane in the Makgadikgadi Salt Pans! Flying over zebra and wildebeest to create the incredible shots seen in the video. The film crew were being shown around the pans by James Stenner and John Barclay of Barclay Stenner, close friends of the Foots. Chatting to John, Joseph stated that he had shot almost everything he came for in the pans. However, he had one more shot he wanted to film; America’s biggest star, on a beautiful horse, cantering past some giraffe… John turned to him and said “you know what, I know just the people to talk to”.

On the last day of filming before team Swift jetted back to LA they arrived at Royal Tree Lodge with camera in hand and ready to film some giraffe. Three pristine, sparkling and camera-ready horses were presented to Mr Khan and our budding star – and arguably the biggest show-off – Dupfrie was selected.

We set off by horse, car and on foot with David Foot guiding us to the giraffe. Almost immediately, we came across two large males standing in a wide open grass plain. Perfect – or so we thought. As we approached on mass, the giraffe took one look at us and headed straight for the thick bush. David explained to Joseph that whilst the giraffe are happy and calm in the presence of horses, they do not like people on foot. After a moments thought, Joseph answered: “Right well you better get me a horse then”. And so horse-cam was created. 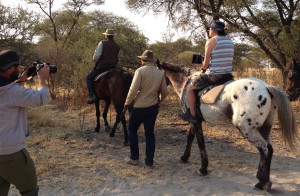 This ladies and gentleman is one of LA’s most legendary producers astride our very own Kambuku off to film some giraffe. There is a first for everything!

Giraffe shot nailed it was time to get some slow-mo canter. Dupfrie cantering through the bush was captured by Joseph filming this time from the boot of the car. 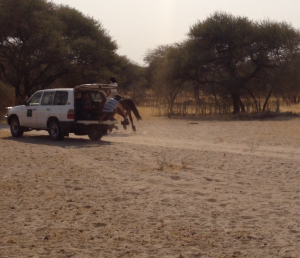 Team Swift drove off and left behind a very excited team Foot who weren’t quite sure how they were going to keep the day’s events secret for the next three weeks! Ride Botswana’s very own Dupfrie and the Makgadikgadi pans were going to be in one of America’s biggest stars music video. The last of which – Blank Space – received 1.2 billion hits on youtube and counting.

So here it is – look out for our stars in Wildest Dreams and let’s see those hits rocket.